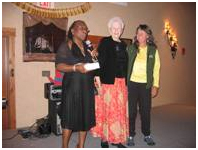 Nominated by her Statewide Independent Living Council, Joyanna Geisler (left) is said to have

a “can do – no nonsense” attitude about Independent Living.

Joyanna Geisler fell in love with Homer, Alaska and adopted the small town of just over 5,000 people. In 1992, she started the Kenai Peninsula Independent Living Center (KPILC) whose service area is called the Gulf Coast of Alaska. Her core service area is the Kenai Peninsula, with outreach to Kodiak Island and Prince William Sound communities. The entire region could be classified as rural as it consists of only a handful of towns with a population of 4,000 or more. In total, there are 74,611 persons in her service region spread out across an area roughly the size of the state of Wisconsin.

In the beginning and for a few years to follow, Joyanna did the work of several people. The Center grew incrementally as she tirelessly advocated for additional resources with DVR and the SILC to serve her area. Today, KPILC is a well respected agency, with offices in 3 communities, 7 employees and a 2008 budget of $705,000.

Working to transition consumers out of nursing homes is one of Joyanna’s passions. Nursing home administrators in her area are never happy to see her coming in to work with a consumer that wants out because they know she will succeed. She and her staff are experienced in advocating on behalf of individuals with disabilities and work tirelessly to help acquire the services and benefits to which individuals are entitled and that will allow them to move back into their communities. Recognized as the most experienced benefits planner in the state, Joyanna regularly shares her knowledge by mentoring other centers to help keep consumers from slipping through the cracks. To ensure a transition is safe and successful, the KPILC team works closely with families and individuals, nursing home and long-term care staff as well as medical treating professionals.

Under Joyanna’s leadership, KPILC has been instrumental in affecting disability policy on both a state and federal level. As a systems advocate, Joyanna chaired the statewide committee that brought consumer-directed personal assistance services to thousands of Alaskans. She also has led the charge to get her fellow directors and the SILC to work together, share information and leverage the power of IL into a force to be reckoned with!

The transportation voucher program that Joyanna instituted is one of the finest examples of a consumer-controlled program in existence in the state.  In conjunction with the Alaska Department of Transportation and area taxi companies, KPILC offers a voucher system that pays consumers’ cab fares for transportation to doctor’s visits, shopping or just for mobility. This is one of the most popular of the Center’s programs, having fewer restrictions than many transportation programs and allowing users to decide when and how they will use their “ride”.

KPILC maintains a presence in the Peninsula schools by offering youth with disabilities and other high risk kids the opportunity for intensive training in basic work skills. Students lean the importance of appearance, punctuality, and accountability in the work place. Joyanna and her staff work with local Chambers of Commerce to introduce participants of the TALENTS program to area employers and offer employers a guarantee that program participants are well acquainted with expectations in the workplace.

Other programs KPILC supports include:

Nominated with pride and admiration of her as a rural CIL director, SILC ED, Patrick Reinhart says, “I cannot imagine a more deserving advocate and harder worker when it comes to promoting IL in rural Alaska.”