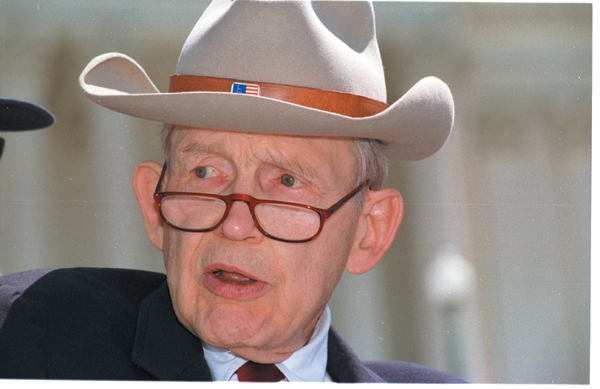 To the oversight hearing on the Rehabilitation Services Administration held by the Select Education Subcommittee of the House Committee on Education and Labor, November 18, 1987.

Certainly, OSERS-RSA has, during the past few years, initiated the very progressive new programs indicated by our great supporter, Congressman Bartlett, and my distinguished colleague advocate, Assistant Secretary Madeliene Will.

We must create a continuum of services, attitudes and environments which will enable all of our children's children in every nation to live lives of productivity, dignity and quality in the mainstream of society.

I will do anything - including, if necessary, playing another role - to cooperate with you and your colleagues in the Congress, with the administration, and with my colleagues in the disability community as we strive together to fulfill this sacred responsibility.

Like the founders of our independence and our constitutional government, we must transcend unity with all who love justice to build on the firm foundation which you in the Congress and others in this room have laid.

We have no excuse to fail. We cannot afford to fail.

We have no excuse to sacrifice those responsibilities to self-indulgence and self-destructive hostility.

We live in the richest nation in the history of mankind. We have great programs like basic vocational rehabilitation, independent living, supported employment and rehabilitation engineering. We have all the human, technological, economic and political resources necessary to effect a cultural revolution which will utilize the methods and products of science for the dignity and quality of human life.

We stand at a historic crossroads. We are approaching foundational decisions about the future of rehabilitation and the fundamental rights of people with disabilities.

Let us not seek scapegoats, let us seek solutions. We have no irredeemable enemies, only enemy attitudes.

Mr. Chairman, I respectfully appeal to you and your colleagues in Congress, and to all present, for guidance, inspiration, moral leadership, and if necessary, support for legislative action which will enable RSA to meet its historic and expanding responsibilities in the nineties and as we enter the 21st century. Help us, above all, to overcome hate and hostility, and to unite.The problems of OSERS-RSA must be solved; and with good faith by all who truly support the independence and equal rights of people with disabilities, they can be solved, and they can be solved without asking any party to compromise on any legitimate issue of principle.

At issue here are principles squarely endorsed by the President, the Congress, all the great leaders of our major political parties and the overwhelming majority of the American people.

Our problems are complex. We are confronted by a vast, inflexible federal system which, like the society it represents, still contains a significant proportion of individuals who have not yet overcome obsolete, paternalistic attitudes about disability and, indeed, about government itself. There is a resistance to any sharing of their centralized authority with people with disabilities, their families, advocates and professional service providers, in or out of the federal service. Good management is too often subordinated to the protection of power. And, magically, a small but all too effective minority in the federal service and in the community seem dedicated to divide and conquer strategy and promoting hostility among government, advocates and professional service providers.

The problem with our external relations is not, in my view, that the state vocational rehabilitation agencies oppose supported employment and other progressive rehabilitation services. My personal research has convinced me that while the problems of people with very severe disabilities have only begun to be solved, the great majority of the rehabilitation profession have - within the constraints of the law - limited resources and massive public prejudice - have been effectively dedicated to solutions. They have, along with great advocacy groups like ARC, NFB, NAD, ACB, UCP, TASH, NAMI, NCIL and NHIF created a firm foundation from which such solutions can occur.

The basic problem here is not simply that Justin Dart is involved in a trivial turf and personality conflict with Madeleine Will. Certainly it is not that the President, who campaigned on a platform of productive independence for all citizens and who endorsed the very progressive concepts advocated in Toward Independence, is personally dedicated to dismantling vocational rehabilitation and independent living.

Mr. Chairman, I have had almost no effective authority to management solutions. But that is no acceptable excuse. I took an oath and I accept a salary as Commissioner of RSA. I apologize to you and to the nation, that in spite of 14 months of struggle working literally 7 days a week, in spite of 8 months of appeals for serious attention and definitive action through the regular channels, efforts by my colleagues and myself to resolve our problems have not been successful. Faced now with the possibility that paternalistic central control, non-professional management and policies of hostility will be institutionalized for years by current revisions of organization and policy, I ask for your help, and that of the community.

But Mr. Chairman, based on my experience as Commissioner, and my personal research in each of the fifty states, and five our largest Native American Nations, I must report to you that OSERS-RSA has been for many years, and is today, afflicted - particularly in its central office -- by profound problems in areas such as management, personnel and resource utilization. We are ravaged by disunity and hostility internally and in our vital relationships with our state agency and grantee partners, and certain other segments of the disability community. As I reported to Senator Harkins last month, I believe that these problems are negatively impacting services to citizens with disabilities.

During my tenure as Commissioner, RSA has - thanks to the valiant efforts of our undermanned staff - accomplished much that is positive.

Our agency, our community is confronted by grave challenges, magnificent opportunities and future decisions. The time has come to rise above pride and protocol, to face reality, and to unite in responsible, democratic action.

Mr. Chairman, my prepared presentation and other materials has been and will be submitted to you. Because the issues we address today involve the fundamental human rights of millions of people with disabilities, and the basic principles of democracy and good government of the President, Congress and the Nations, I am going to depart from politics as usual protocol to make a statement of conscience.

Board of Directors Login